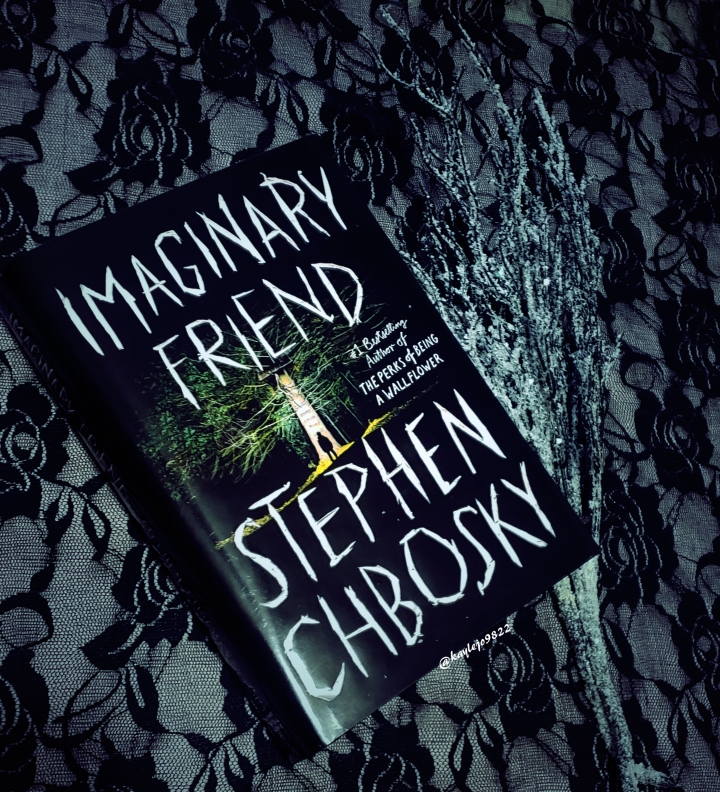 “We can swallow our fear or let our fear swallow us.”

How has everyone been? I tell you this past week was exhausting! I did not get half the things done that I needed to, and with only one day off from my 9-5 I am still dragging. Never the less here we are because the time has come for another book review. This book took me what seemed like forever to get through, but finally here we are ready to review.

Let me tell you I have a lot of thoughts on Stephen Chbosky’s first take on horror, Imaginary Friend. So let’s not waste time and let’s get into it, shall we? Also don’t forget if you like this kind of content be sure to click that like button, and follow me so you don’t miss out on future content!

I feel like I should preface this with two comments. The first comment being this particular review, unlike my others, will definitely contain spoilers. The second being I loved Chbosky’s first book best seller The Perks of Being a Wallflower, and therefore do respect him despite my thoughts on this new book. With that being said let’s get into my thoughts on Imaginary Friend.

If you haven’t already guessed it let me just go ahead and say I did not enjoy this book. I wanted to love it, and the blurb totally pulled me in, but I did not like it. This story takes place in Mill Grove, Pennsylvania following our lead seven year old Christopher and his mother. What caught my attention is young Christopher disappears for six days, and when he is found coming out of the woods he has a voice in his head telling him to build a tree house or everyone he knows will never be the same again. Sounds like an interesting story line, but it didn’t live up to its hype.

My first issue with this book is the fact that it is very religious. There is no warning that tells you that the book will be taking a religious turn which is a total turn off for me. I don’t enjoy religious text so I would have liked to know that this book is 100% about the devil and Hell. If you are at all offended easily by God being disrespected then this probably is not the book for you. Not only is he repeatedly referred to as a murderer, but they also turn a child into the new God to battle the devil. Therefore, in my opinion there should be some warning to the religious aspects of the book. When you read the blurb you don’t get a religious vibe so it comes out of no where.

I will however say that the Hell element ended up being the only thing I liked in this book which was unexpected. Chbosky really depicts his version of Hell, and what goes on there. It actually is an interesting concept. After Christopher goes missing you get introduced to the imaginary world which you quickly realize is actually Hell. He paints a pretty cool image that makes you excited about the imaginary side before realizing what it truly is. I do appreciate his vision.

My problem is this book is 705 pages when it should have been maybe 250. There is so much added fluff and repetitiveness for no good reason. He dragged this book out so much farther than I even knew imaginable. I honestly would have been more interested in this book if he had shortened it. The main perspective we follow is Christopher, but at random times he throws in a perspective from various characters in the town. Not only are they ill placed they don’t add to the story. When he starts talking about the other characters it gives you an idea of what their greatest guilt is that they will suffer in Hell for, but it doesn’t feel necessary for the overall story.

If you would remove the other perspectives the story would still play out just fine. Then you have the issue of repeating the same sentences so many times that it actually got annoying to read it over and over. For example, I never want to read or hear the phrase death is coming death is here we’ll die on Christmas day ever again. He puts this phrase in the book so many times it could take up a whole chapter. It becomes annoying and incredibly pointless.

Then you have a sub-story that adds nothing to the end. Here is where a spoiler comes because I need to rant about this. One of the people in town is a Catholic girl by the name Mary Katherine. Now she comes from a strict religious family, and is very much the save yourself for marriage type. The devil chooses to whisper in her ear enticing her to have oral sex. After the event occurs he then continues to whisper to her about how God hates her. Then by some miracle though she has never had sex she ends up pregnant which you later find out is apparently the devils son. WHY? Why did he feel the need to write this into the story? In my opinion it does not add anything to the overall story. It is just out of place, and in my opinion is added for no reason. If it served a purpose I don’t see it.

There was so much potential in this book, and unfortunately it missed the mark for me. The idea behind a tree house being a portal to Hell was really good. There is further detail on the tree houses that was also cool. Chbosky’s vision of what Hell would be like, and his portrayal of the devil/Eve was great. The idea of the devil himself whispering into humans ears enticing them to do things was a great idea. He just didn’t pull it together for me. He strayed from the main story too many times to keep my interest, and the ultimate ending was lacking. I wanted more.

All this being said I still respect Chbosky as a writer, and I will be interested in his future writing. This particular book simply was not for me. If you have read it I would love to know your thoughts! Did you love this book? If so please share what made it stand out to you. What did this story lack and what did it do well? Let’s talk about it in the comments!

As always thank you for spending time in my quirky corner of the web! I hope you enjoyed this review, and hopefully my next one can be more positive. Until then I hope life is well, see you soon readers.

Welcome to my Quirky little corner of the web! In this blog I review beauty products and books, ramble on about various topics, and throw in a few DIY projects/ lifestyle content! Thank you so much for stopping by, and I would love to have you as part of my quirky online family!

Find Me On Social Media

Find Me On Social Media

Translate My Content Into A Language Of Your Choosing!